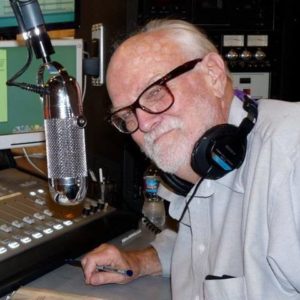 At 82-years young, Bruce Bratton is among of the most colorful characters you would ever meet. An Army veteran, he served in the K9 corps and was stationed at numerous US bases and in Germany. Once out of the military, he was drawn to Berkeley, San Francisco, and eventually the coastal town of Santa Cruz where he pursued a fruitful career in hardware, marketing plus art and entertainment while residing in Davenport and Corralitos, California.

He worked as a marketing consultant for local small businesses while hosting a weekly radio show and writing an opinion column for the local papers. In fact, he has written a weekly opinion column for 41 years in many Santa Cruz newspapers and continues producing his weekly column online. Over the course of his long career, Bruce has directed, produced, and performed at many radio stations and currently hosts a weekly one hour interview program and also reviews films on another program on KZSC FM. Bruce has hosted, directed and produced at numerous radio and television stations including KGO, KCBS, KPIX, and Santa Cruz Community TV channel 26. He even recorded music for Capitol Records, Fantasy Records, Sony Music, and Arhoolie records.

Bruce desired to move closer to his main place of work in Santa Cruz but the cost of market rate apartments made this impossible. In the late 1990s, he met the former CCH Community Manager at Arbor Cove, Gale Cruse who encouraged him to apply for an apartment. Despite a long wait list, the time eventually came when he receive the call from Gale. He was elated. “For low income seniors it’s hard to imagine anyplace better than Arbor Cove. The waiting list is long, but you couldn’t ask for much more than what we have here”.

He moved to Arbor Cove in 1998 and appreciates the CCH community describing it as “a clean, decent place with fine staff and great facilities”. As he tours Arbor Cove, he enjoys the openness of the campus, friendliness of residents and good quality of life.

Bruce joined the resident association and served on the Neary Lagoon Senior Housing Board of Directors. Eventually, he became president of the association. Over time, he has served on boards for numerous cultural organizations and worked as campaign manager for several political organizations. He also emceed many community events which were often attended by local politicians and dignitaries.

He is saddened that local development in this beautiful area favors hotels rather than permanent subsidized housing. He shares, “It’s a shame that people who contribute to their local community, like Santa Cruz, cannot afford to live here. They are forced to live in the outskirts. There’s not enough support for low-income folks here in this area.”

He appreciates the efforts made by CCH to increase the quantity of affordable housing, calling it, “a beacon. It’s a perfect model of what is possible. We need 20 more Arbor Coves.”