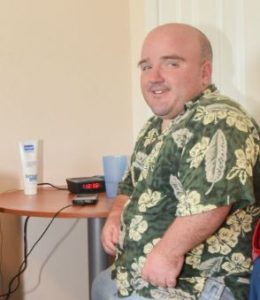 James Mattison loves wearing costumes and making people happy. If you’re looking for a leprechaun, Easter bunny, elf or other character – James is your guy. He started his business more than five years ago. Like many start-ups, the business had its ups and downs but is fueled by James’ passion for entertaining. Today, he’s in a safe place where he can focus on doing what he loves best, but it wasn’t always this way.

James readily admits he made some bad choices. “I struggled and was hanging out with the wrong crowd – drinking, pan handling and just hanging around. I got in a bad way,” James explains. For a while, James lived with his mother in a hotel room but when she took ill and had to move, he found himself on the streets of Houston.

“Houston gets cold in the winter,” he quips. “Living in the elements is no fun.”

As fortune would have it, he met a guy from the NFL who noticed James on the street corner and saw potential in him. The player helped James start his current business, “Shorty’s Rent a Midget.” Soon after, James began treatment for manic/depression and connected with a CCH-mission partner – Harmony House. He learned about an opening at CCH’s Woodland Christian Towers, filled out an application and within several weeks had the keys to his own fully-furnished one-bedroom apartment.

With a roof over his head, James has his own space and is no longer living in the elements. “I like it here,” James says, “It’s nice and quiet. I like my neighbors. I have my own kitchen and I can cook meals. I don’t have to worry about checking out each day, like at a hotel. I give this top marks, five stars.”

James can now concentrate on his business. When he’s not working, he enjoys reading, listening to music, going for long walks and taking the bus to explore the city.

For anyone who is considering giving to a worthy cause, James encourages donors to think about CCH. “I say do it,” he says. “You’d be helping a lot of people. Sometimes we all need a helping hand. it doesn’t mean you’re a bad person; you may have just fallen on bad times.”

James adds that everyone can learn from their mistakes. “Look where I am today,” he says. “I’ve been through my hard times and more good times are on the way. God gives us talent and mine is to make people happy. I love putting smiles on people’s faces.”