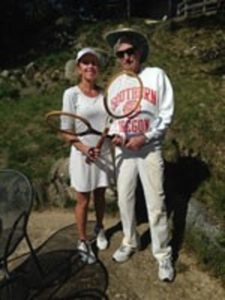 Google his name and within the first page, you will find articles about Charles “Chuck” Jandreau who became one of the best U.S. tennis professionals of his time. Chuck moved to Garfield Park Village in 2012 after living with his lovely daughter, Karla, in the wooded area of the Santa Cruz Mountains. When talking to Chuck, his colorful stories of his heyday in the 1960’s with Hollywood elites are truly awe-inspiring.

Years prior to that glorious period, he had been teaching political science at College of the Desert in Palm Springs and avidly playing tennis at local clubs. At the age of 36, he decided to become a tennis professional and later a tournament player. At the height of his career during the 1960s, he played Rodney Lavers, a former tennis champion who was widely regarded as one of the greatest players in tennis history. While his professional career brought him fame and fortune, his close connection with the Hollywood elite elevated his status to celebrity. While reviewing pictures of himself teaching tennis to personalities such as Johnny Carson, Eva Gabor, Dinah Shore, Lloyd Bridges, Janet Leigh and Willie Mays, Chuck smiles and reminisces. “I met them through Jack Warner (founder of Warner Brothers Studios), whom I was teaching at the racquet club in Palm Springs,” he recalls.

Chuck had been an all-around star athlete much of his life. Prior to tennis, he had received Far Western Conference honors in football, basketball and baseball. He had also earned accolades as a quarterback for Southern Oregon University (SOU) where he was later inducted into the SOU Hall of Fame. For a time, he had also played for the St. Louis Cardinals.

During the early part of his life, prior to his professional tennis career, he served in World War II as a second lieutenant in the US Army. After his return, he completed a master’s degree in Political Science from USC and began to teach while building his tennis skills. He loved Palm Springs but was ultimately wooed by greater opportunity in Las Vegas where he worked as a tennis professional at the Riviera Hotel and Casino. Yet, his greatest adventure was the journey to return to his roots. While the glamour of celebrity dazzled Chuck for many years, his heart brought him back to his home. He says, “For a while, I had lost my way but I returned to my Christian faith and my family.” With five children, 10 grandchildren and 11 great grandchildren, his days are filled with love. He gave back to his community by supporting the local food bank, delivering meals to home-bound residents and volunteering at the local swim and racquet club.

His life at Garfield Park Village is much quieter by comparison but his daughter, Karla, is grateful to have her Dad closer to her. Today, Chuck, at 92, can be seen talking long walks, visiting with neighbors and enjoying his memories. Karla shares, “My dad often expresses how fortunate he feels to be able to live in such a great place, with kind neighbors, great staff…”