Some Pandemic Changes May Stay Around 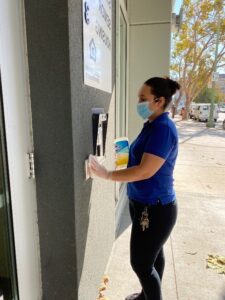 As states reopen following more than a year of COVID-19 protocols, shelter-at-home orders and other restrictions, many senior housing leaders are reflecting on the impacts and lessons learned from the pandemic.

Without a doubt, the pandemic severely affected seniors perhaps more than any other sector because of the inherent health risks. The disruption caused by the pandemic is expected to generate some long-term changes in design and operations of senior living communities while other changes may be short lived, according to a survey of 200 industry professionals conducted by the New York based architecture firm Perkins Eastman.

Results of the study suggest there are divergent views about the current industry status, particularly given negative media which failed to delineate between the various types of senior living communities. The general consensus, however, is that the future direction of the industry is bright.

A majority of respondents (77%) reported that the loss of revenue experienced because of the inability to fully market or fill vacancies during the pandemic should be temporary in nature.  Nearly 80% believe increased operating cost resulting from a greater focus on reducing the spread of disease will continue. Other impacts such as design changes to common areas, amenity spaces and HVAC system upgrades also are considered long-term. What is not readily known is the effect, if any, the cumulative negative press will have on marketing and consumer behaviors for the long run.

The survey also showed interest was trending down for urban living, multi-generational living and destinations for seniors living abroad. These changes may be a short-term outcome of the pandemic. The study also reflected a steady rise in residents’ desire to have more flexibility and choice, with a continued emphasis of wellness, aging in place, apartments-for-life, hybrid independence, assistant living and more centers for healthy living.

While there are conveniences and events/attractions associated with urban living, the survey authors noted there is also concern about residing in dense areas and the resulting health risks associated with close proximity during a pandemic. This may play a role in some people’s declining interest or fearfulness of city dwelling.

“Based on lifestyle expectations of the senior market, we believe this is a short-term trend, but only time will tell,” the survey authors stated. “What this survey shows, however, is a resilient industry with an outlook on long-term growth opportunities.”